No day is ever the same when living with chronic illness. The routine may be vaguely the same but each day revolves around adapting to what symptoms are presenting that day and the severity of them in the moment. What may be rather bad in the morning may be insignificant in comparison to another symptom by midday

A good example of this is today. Sundays are always our family rest days. We go to church, sometimes have family to us but generally speaking we are at home together. Now I was already shattered after a bad night sleep with nerve pain in lower right leg and lower back pain. However upon getting up my neck spasm started pulling my head down towards my shoulder. It’s a particularly nasty spasm that’s hard to break. I have a percriped Aspen collar for when my neck does which I alternate with wearing a TENS unit and a heat pack.

I’ve not had to wear this collar in a while. The overly nervous me did my best to disguise it with a scarf as we sent out for church. It deffinently took some getting used to wearing it out and about and learning to ignore the second glances once again. But it’s worth to help ease off the painful spasms somewhat.

My Botox appointment is extremely late this time round having being schedule for almost six months instead of three. Whilst I’m hoping for a cancilation to come up, I am in the mean time going to ask my general practitioner to allow me to my Trihexyphenidyl untill I’ve had my injections

When I met my partner Damon back in 2016 I was upfront about the fact that I had a whole host of chronic conditions some of which would deteriorate as I aged. It was a subject that I broached on our first date, romantic I know, but it was important to me that he knew life with me would not be an easy one; our first date lasted five hours. What was meant to be coffee, turned into a museum trip, and hours spent talking on a bench overlooking the River Cherwell. At the time my Dystonia was my most limiting condition. The EDS was annoying and had its fair share of debilitating moments but in comparison was easy enough to deal with.

However over the years with a good combination of medication and very regular Botox injections my Dystonia is often far more controlled, yet my EDS has spiralled dramatically so. My jaw which takes the brunt of both conditions is in need of replacement yet both conditions make replacement not necessarily the easiest call for my surgical team; it’s an ongoing argument. My knees are in a similar state. They too need replaced. They currently sublex at 0 and 30 degrees constantly yet bracing doesn’t seem to work due to the change in position with each time the knees come out of place. I frequently joke that I’m falling apart and honestly it feels that way.

The latest part of me to be affected is my hearing. My hearing tests have showed that im hearing impaired and im awaiting further appointments on the next steps to see what aids will help me. Whilst my hearing being affected isn’t overly surprising, it wasn’t something at 27 I expected to be told. However after almost a year of struggling I knew it was time to give in and get some help.

If you look at me you could be forgiven for not realising anything was wrong. Which is one of the reasons Rare Disease Day is so important. Disabilities come in all variations and I for one never look the same one day to the next. 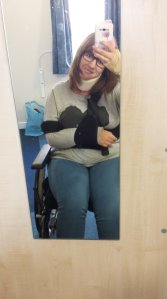 Today was the first time I have had to give in and use my wheelchair at uni. I had anticipated that today would be harder than usual as I had traveled to London yesterday for my routine injections. My body always reacts badly to them for the first 24 to 48 hours, normally this leaves me in a lot of a pain and with an increase in spasms, which with a mix of painkillers and muscle relaxants I can manage. I therefore had not expected to fall over when getting out of bed this morning. My back and neck had gone into a hideous spasm and my brain had functionally paralysed both legs and my left arm. I spent half an hour lying on the floor like this, debating what to do. I gave myself an hour in which if I managed to get dressed I would venture to uni in my wheelchair and braces, and if I was still on the floor I would ring the Wardens.

I felt extremely proud of myself that it only took half an hour to get dressed this morning despite my brain fighting me, this must be a new personal best. I admit that as I braced the majority of my body I was extremely nervous. My peers are aware that I am ill, but they have never seen me like this, I had no idea how they or my lecturers would react. Within minutes of being in uni my nerves were swept away. Not only did no-one bat an eyelid, but people helped me when I needed it without me even asking.

Part of me had strongly wanted to not go in to uni today. I was worried of what others would think, and how I would physically cope, I had already had several draining days and was concerned that this on top would be too much.  I am extremely glad that I took the leap, and forced myself to go. It will help keep my mind at rest the next time my brain decides that a day of alternating between spasms and paralysis would be fun.

Its been a few weeks since I blogged and it is hard to know where to start as so much has happened. I have had hospital appointment after hospital appointment, and I find that I am still trying to wrap my head round them all. I’ll keep todays blog brief and just mention a couple of appointments.Thankfully though my Dystonia has not been too bad as of late, my legs are tolerating my splints with more ease which is making life and physiotherapy much easier.

Last week I had an appointment at the Royal National Orthopaedic Hospital to see a specialist to do with my Joint Hypermobility syndrome, she has decided she wants me put on an outpatient program there building up towards being put into a 3 week intensive rehabilitation program. It was extremely a positive appointment that has left me feeling very optimistic. Joint Hypermobility Syndrome combined with Dystonia means my body can end up in some weird and wonderful positions, which can be rather painful, so I am hoping this program will give me some coping tools.

On Wednesday I attended a local private hospital that treats Lyme Disease to see if they would consider treating me. The

Dr was rather lovely and very thorough in her examinations which left me feeling quite confident. They took blood to test for a number of things including Lyme Disease, and explained the treatment process if the results they needed came back. Having treatment through this hospital will be extremely expensive however you cannot put a price on health. Lyme disease has robbed me off so much of my life, and in many cases literally takes people lives, I don’t plan on being next. The NHS turning a blindeye on this condition will be one that in years to come they will look back on with regret.

This coming week is filled with more appointments. I am rather looking forward to seeing my neurologist, I am going to ask if he will botox my calf again and see if this helps with learning to walk!

Since my last post my ability to move around has deteriorated rapidly! The shake/tremor in leg has become extremely violent and my leg feels like its made of jelly. The force of the tremor physically shakes the upper parts of my body as I try to hobble about. I have never had a sense of balance, so you can imagine how hard I am finding it to stay upright, when my leg is shaking me to the point that I would fall if I was not being held up. This tremor has made my knee extremely painful, the other night the pain was so excruciating that I ended up having a Non Epileptic Seizure.

I am trying to work out whether this tremor is a new development to my leg or if it is a development of a Dystonic movement that was already happening. You see, often when my leg goes into spasm, as the spasm is about to go, my right leg would shake like mad. The way I always thought of it was that my leg was shaking away the spasm, this sounds silly but it was a comforting thought, these tremors would last from to seconds to a good couple of minutes. I think it is likely that this new issue is simply a development of the previous tremor, as Dystonic movements do develop (get worse).

However this creates a whole new ball game. I know that with Dystonia, you cannot really forward think, as you never know what will happen from one day to the next. Nevertheless I find myself having to think forward, as I like to have some sort of plan in place. After speaking to someone with similar leg problems to myself and hearing what they do to manage their symptoms, I have had an idea which I would like to discuss with my doctor. I want to put across to him the idea of getting a knee or leg brace. I have previously used a splint for my hand spasms and I found this very helpful in containing the spasms and most of the time it prevented the spasms from getting too extreme. As this worked well for my hand, I think it would make perfect sense to try out on my leg.

I shall of course listen and take on board anything my doctor suggests, I presume he shall offer me some sort of muscle relaxant to help, and I shall happily do/try whatever he wants me to. However I think I shall really press this idea. After looking into it more, I have read about a number of people who have tried knee or leg braces and found that they had good experiences with them. I plan on waiting a few more days before I go to my doctor. I had originally planned on waiting two weeks before I went but I don’t think I can deal with the pain the tremor is causing for that long. The reason for waiting is so that I can go and say, this has been happening, I believe it is a development of a previous movement, its been having for X many days and this is what I want to suggest. For me, I think this is the right approach to take with my doctor.

Who knows what will happen, I can only hope that he decides to give my idea a go! Until then I am going to avoid moving around as much as possible, so that I do not cause myself any more pain!